The album ‘Nine Is the Magic Number’ was released in December of 2015 by Joel and Nick Tucker, or The Tucker Brothers. This album is full of wonderful original compositions and arrangements that show what is happening on the ground level here in Indianapolis. 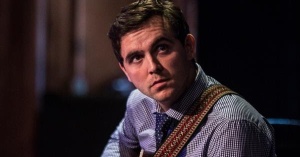 Joel Tucker is a fiercely melodic and intuitive guitar player. When you hear him speak and play, you know he is authentic. There isn’t an assuming bone in his body.

Nick Tucker has risen to the top of the Indianapolis bass market. He is now ‘the guy’ to call for any gig. He has some serious groove in him and can lay a foundation down to make any group sound great.

If you pair these two brothers up with equally musical and competent musicians you get a stellar combination. It all comes together on this album!

I hear they have a new album in the works, so you know we’ll be talking with them again!